WHAT IS A BED BUG? 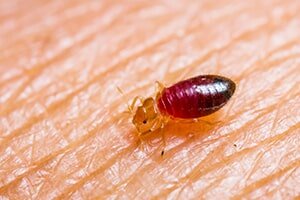 All members of the bed bug family feed on the blood of birds or mammals. The common bed bug, Cimex lectularius, attacks man, as does the Eastern bat bed bug, Cimex adjunctus. There are also other species which attack bats, pigeons, and rodents. Bed bugs are active only at night, usually just before dawn. During the day they hide in cracks and crevices in walls, floors, beds, and furniture. When only a few bed bugs are present, they live close to human sleeping areas; when numerous, they can be found in many rooms of the house. A characteristic “bed bug odor” is frequently present in a home infested with bed bugs.

HOW TO SPOT A BED BUG

Bed bugs are oval, chestnut brown insects, and are flattened from top to bottom. Adult bed bugs measure about l/4 inch in length. The mouthparts are shaped into an elongated proboscis which, when not used, is held backward underneath the body. When a bug is ready to feed, the proboscis is extended forward and the stylets within are thrust into the skin of a host. Mated female bed bugs deposit their eggs in their resting places. One female will produce about 345 eggs during her lifespan.
Bed bugs grow by molting several times. Nymphs look very much like the adults except they are smaller and not sexually mature. There are five nymphal molts and each nymph must have a blood meal to be able to molt to the next stage. Adults feed once a week on the average but feed many times during their four months or longer lifespan. 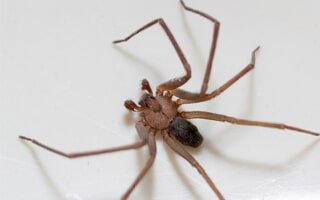 HOW TO IDENTIFY A BROWN RECLUSE

Males and females are similar in appearance and their venoms are equally toxic. Juvenile spiders also are similar in appearance, except for size, and their venom also is potent. Adults range from ¼ to ½ inch in length (excluding legs).The legs are long, slender, not obviously hairy and somewhat darker than the tan or pale brown body. The most distinguishing characteristic, regardless of gender or age, is a dark brown or black violin-shaped marking on the fore part of the spider’s back—the neck of the violin pointing toward the abdomen. Because of this marking, these spiders are commonly called “fiddle-back” or “violin” spiders.

Bites by brown recluse spiders usually occur when people put on clothing or shoes in which a spider is hiding. Some bites occur at night when a spider hunting for insect prey has crawled onto a bed and is squeezed by a person rolling in his or her sleep.
The amount of venom injected by the spider, depending on the spider’s size and recency of having expended venom on prey determines the seriousness of the bite. Victims may have no initial reaction, but they usually feel an immediate, painful stinging sensation at the bite site. The venom does not contain a neurotoxin, but it contains factors which cause blockage of blood vessels in the skin near the bite.

A blister forms at the bite site and a large area around it becomes red and swollen. After a few days, the blood-deprived tissue becomes watery and sloughs away leaving an ulcerous sore. The bite heals slowly, often requiring five to eight weeks to heal. If bitten by a brown recluse spider or a spider that you think may be one, apply a cold pack to the bite and go to a doctor immediately. Medical treatment and continued cool packs can reduce the severity of the bite.
Cosmetic surgery may be desired after the bite heals. In a very low percentage of cases, a bite victim’s internal organ systems become involved in reaction to the brown recluse bite, and the victim becomes seriously ill. Such cases may require hospitalization and symptomatic, lifesaving treatment.

If you have a brown recluse problem in your home or business call the pest control experts at Bug Stoppers today at (316) 788-2847 .

We are a licensed, bonded and insured pest control company. We are WDO certified as well as licensed in the state of Kansas in pest & termite control.